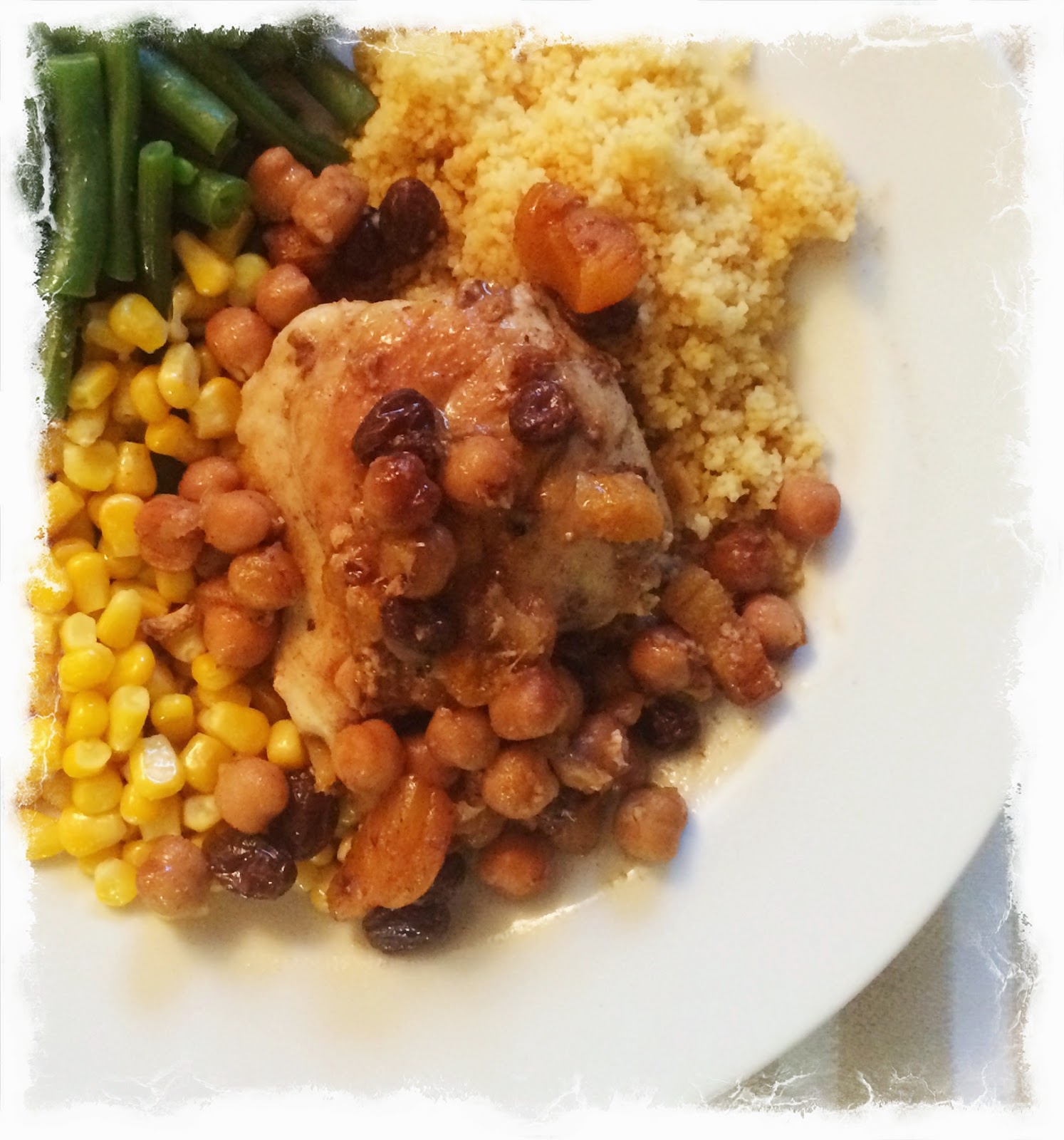 A super simple slow cooker meal. I served it with cous cous and veges.
It only needed about 4 hours on low in my slow cooker.

I'd probably increase the cinnamon and coriander next time too. 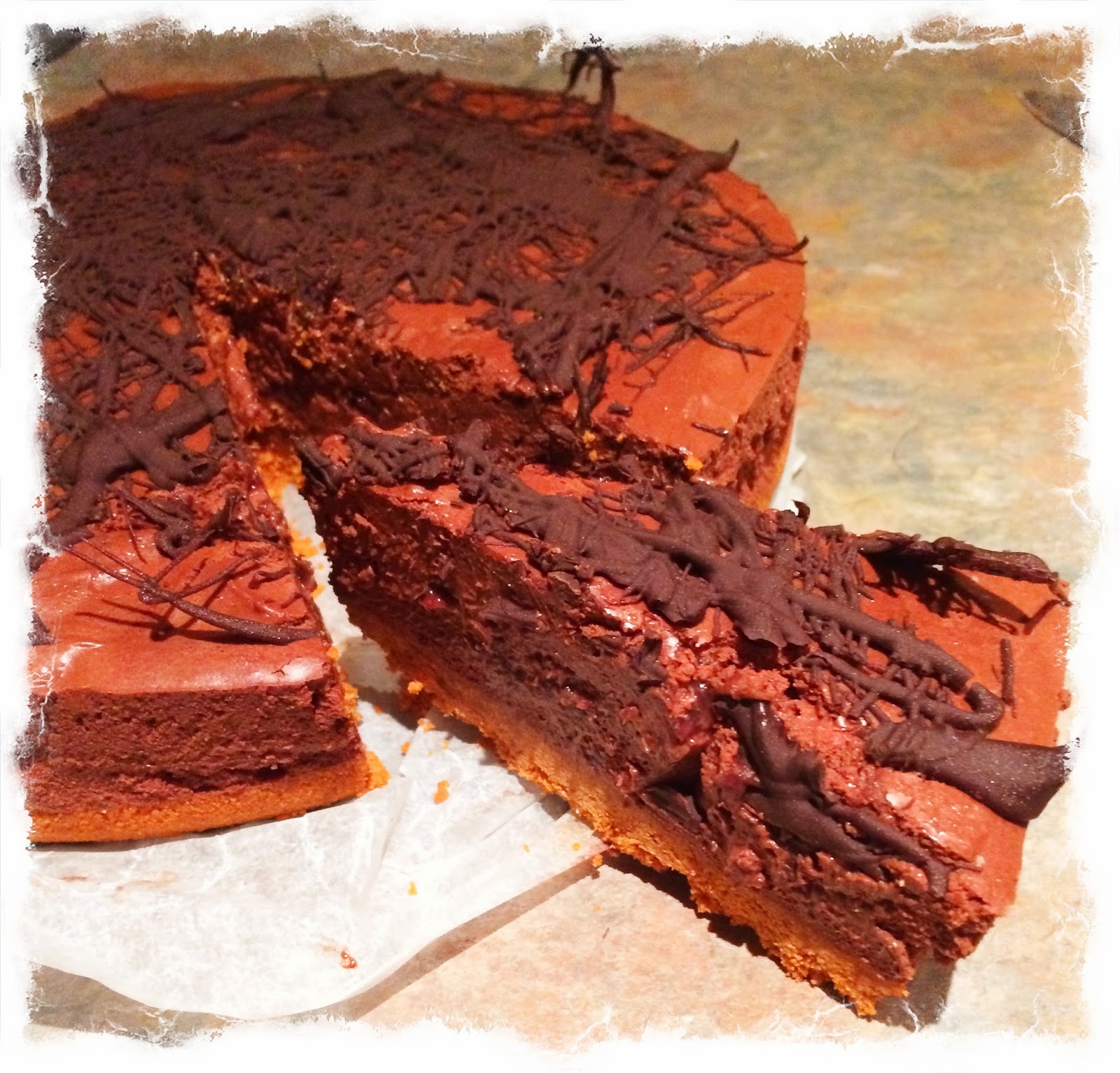 This recipe is a variation of a fruit cheesecake. I really love anything with chocolate in it so it was a logical step to turn this recipe into a chocolate version.
The recipe is pretty forgiving but is best made the day before it is need to make sure it sets.

I crush the malt biscuits and mix in the melted butter in the food processor...but before I had that I have resorted to crushing the biscuits with a wine bottle between sheets of newspaper.

Another trick I picked up after years of bases that didn't always hold together is to use a potato masher to compact the base.

Stir lemonade, sugar and gala tine together in a pot over a low heat until dissolved. Leave to cool.
Crush malt biscuits and mix in melted butter. Press into the base of the tin.
Cream cream cheese, rind and vanilla.
Beat in cooled gelatine mixture and cool until partially set. I don't always wait for this but I do allow time overnight for it to fully set.
Fold in whipped cream, melted chocolate
and well drained fruit.
Pour into crumb base and leave in fridge until set. 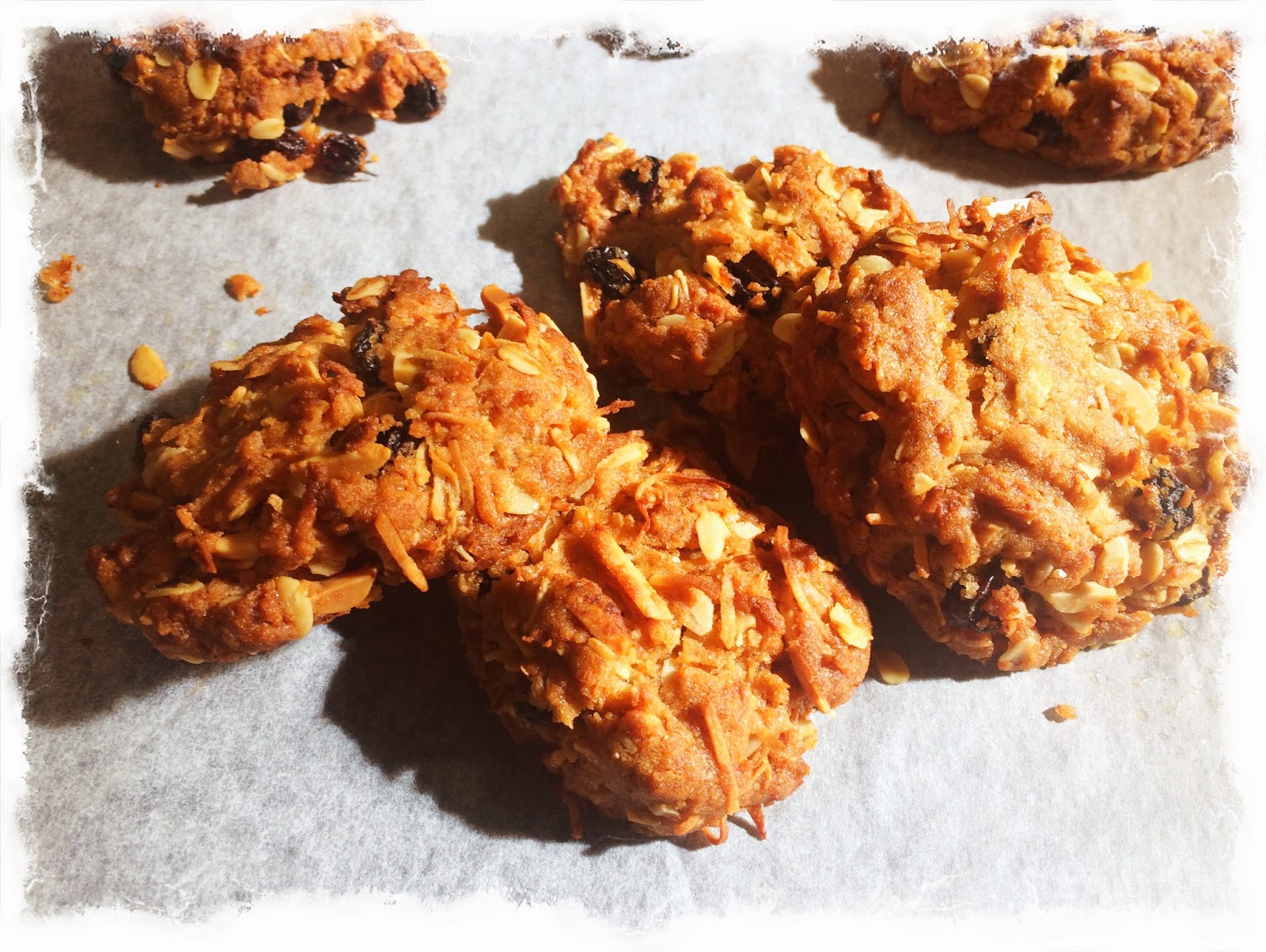 Anzac day is big in our home. My husband has been in the Army (Territorials/Reserves) for about 25 years and has just returned from 7 months in South Sudan.
Anzac day for me often signals the first wearing of winter coats and that familiar "I've got up too early and not had enough sleep' feeling.
This year we have a rugby game in the evening which will mean a late night for our little person so the choice had to be made between the Anzac dawn service or a late night at the rugby. The compromise is attending a civil service for Isabella and me and the rugby...John of course will go to the dawn service as well.

I've meant to make Anzac biscuits for Anzac day for years and have come across a recipe from Annabel Langbein which just has to be a good one to try. The anzac biscuits from my childhood have no almonds, raisins or chocolate but they seem like a great addition.

They are really really nice! A great update of a traditional biscuit.

Preheat oven to 160°C and line at least 2 baking trays with baking paper.
Combine rolled oats, flour, brown sugar, coconut and almonds and raisins, if using, in a large bowl. Heat together golden syrup, butter and water until butter melts. Add soda, then mix into dry ingredients until well combined.
Roll mixture into balls slightly smaller than a golf ball and place on prepared trays, allowing room for spreading. Lightly flatten with a fork or damp fingers. Bake until golden (15-18 minutes). Allow to cool on trays (the biscuits will harden on cooling). Stored in an airtight container, Anzac Biscuits will keep for 2 weeks.
Posted by Unknown at 2:20 PM 0 comments 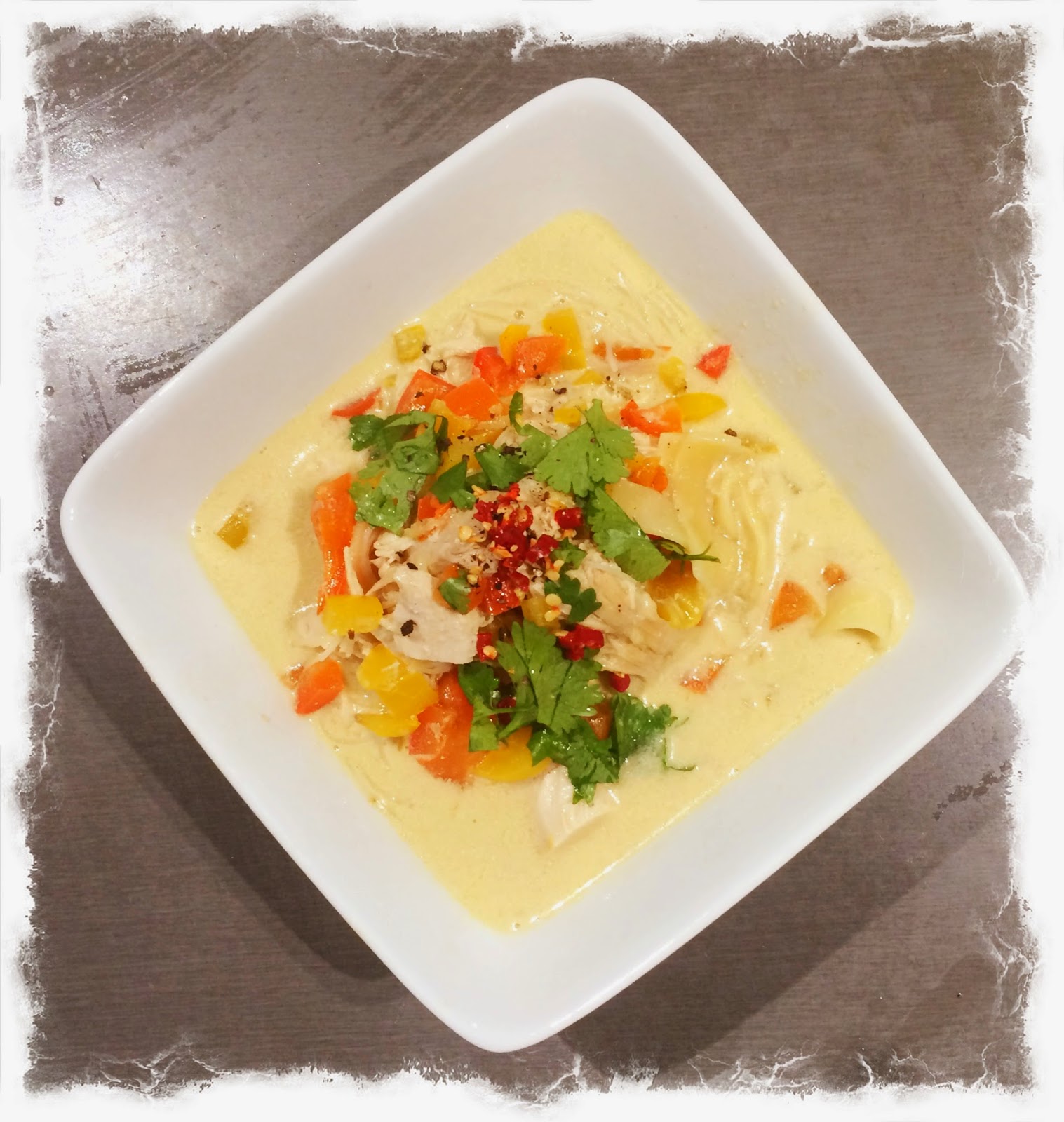 The chill of autumn has finally hit after what was a very long summer. With that cooler weather comes wonderful food and soups. I'm alway looking for slow cooker meals that mean I can arrive home to a meal cooked or almost cooked. Especially nice when its dark when I get home from work.

I've pinned several slow cooker soups to try out. My soup repertoire is pretty limited at the moment - 4-5 favourites that I cook and the chicken and vegetable soup that is different each time depending on what veges are in the fridge or garden.

I love Thai flavours and this looked good because it can be spiced up with chilli after cooking so everyone in the family can have the spiciness they want.

I'd have loved more coriander (cilantro) , unfortunately I never have much luck growing it and the plants in the garden only supplied a few sprigs.

The soup needed salt and I think I'd add fish sauce to give a bit more flavour. Overall it was one I'd make again due to a good taste and the ease of making it. 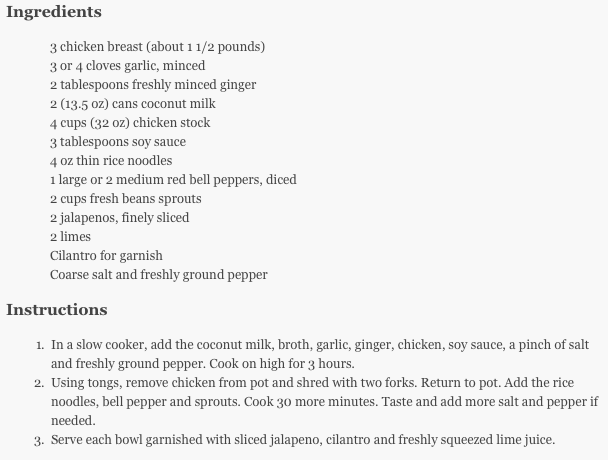 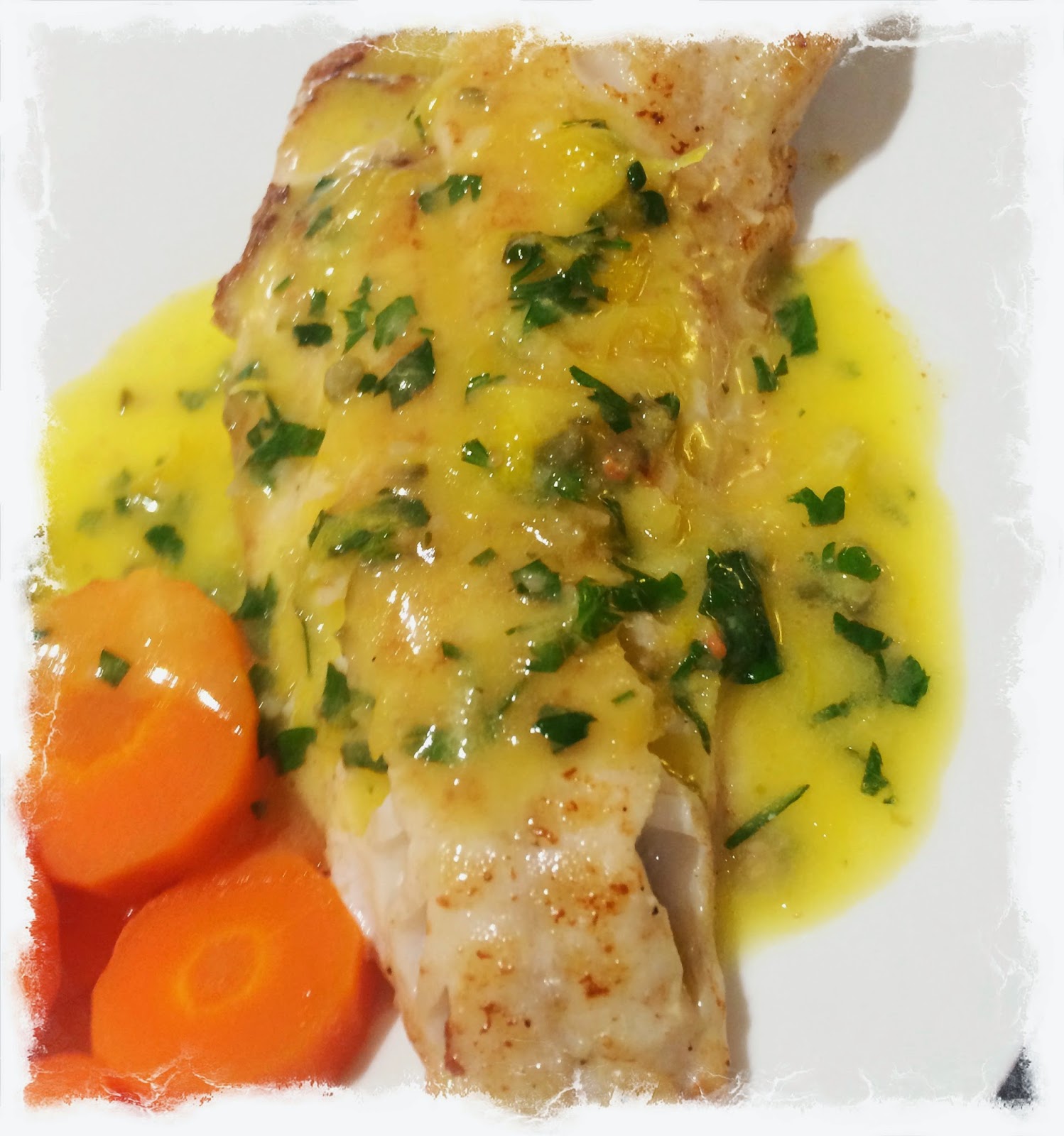 A visit to the Wynyard Quarter and playground and Auckland Fish Market found me with some lovely fresh fish in a weekend when I had time to think about a new way to serve it.
I search Pintrest for a lemon caper butter sauce and this was what I found. It is really easy and really nice. Miss 6 had hers as a side dish and happily dipped her fish in it!

Ingredients:
Method:
Melt 4 tablespoons of butter in a small heavy saucepan over medium heat. Add the garlic and heat, stirring, until fragrant. Add the capers and lemon juice and bring to a simmer. Stir in the remaining 4 tablespoons of butter one at a time, whisking to emulsify. Remove from heat, and add the lemon zest and parsley. Serve at once.
Posted by Unknown at 4:32 PM 0 comments 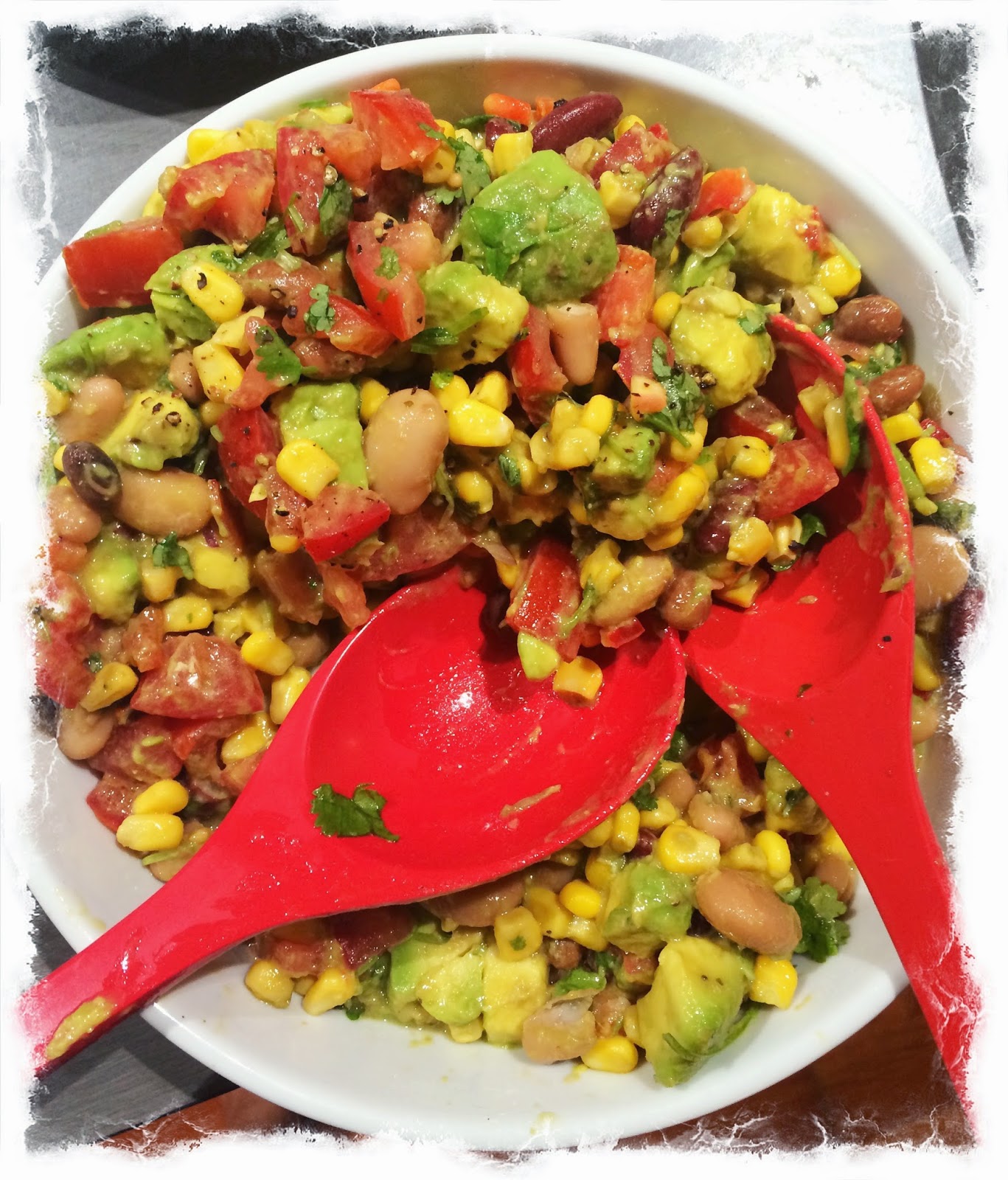 This salad made up part of a family and friends dinner for easter. We had been given a heap of avocados. I managed to stop myself gobbling some to save for this salad. The salad is great and has been just as good over the next couple of days for lunches and dinners. Yes, I may have over catered AGAIN.
A great easy salad that can be made in advance (except the avo) and then put together at the last minute.
My avocados were is bit soft but it was still great.

Combine all ingredients in a large bowl.
Cover and chill. 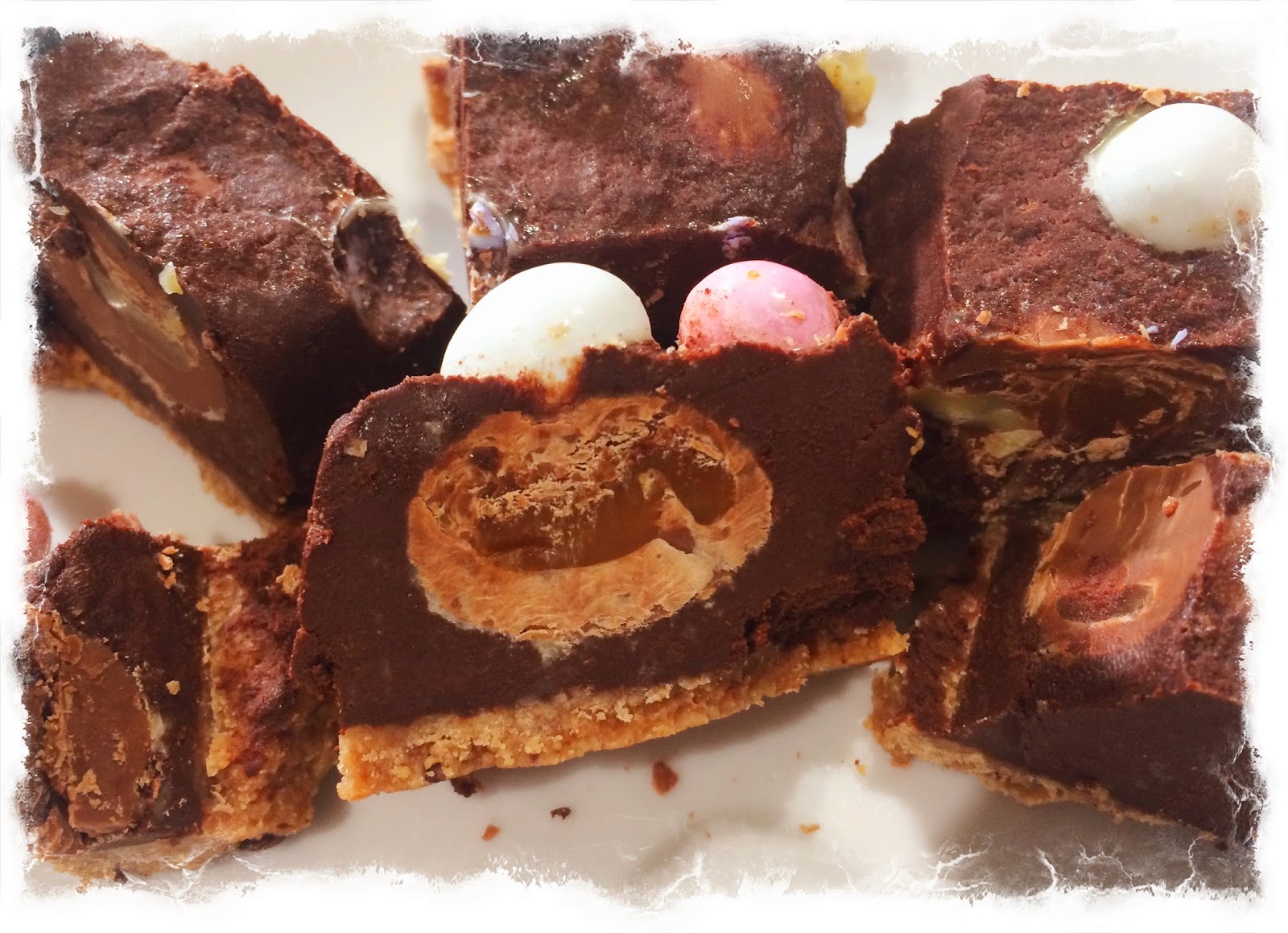 Our Easer plans changed a bit when one of our cats got first disappeared and then returned out of sorts. We took her to the vets and discovered she needed to have most of her teeth out under general anaesthetic. Due to the operation and recovery our plans to go away changed. I decided to embrace the Easter spirit and have a family and friends dinner.
I've added our place settings made by Isabella (6 years) and the easter themed table centre piece in an egg carton with egg shells to hold the flowers and mini easter eggs too at the end of the post. 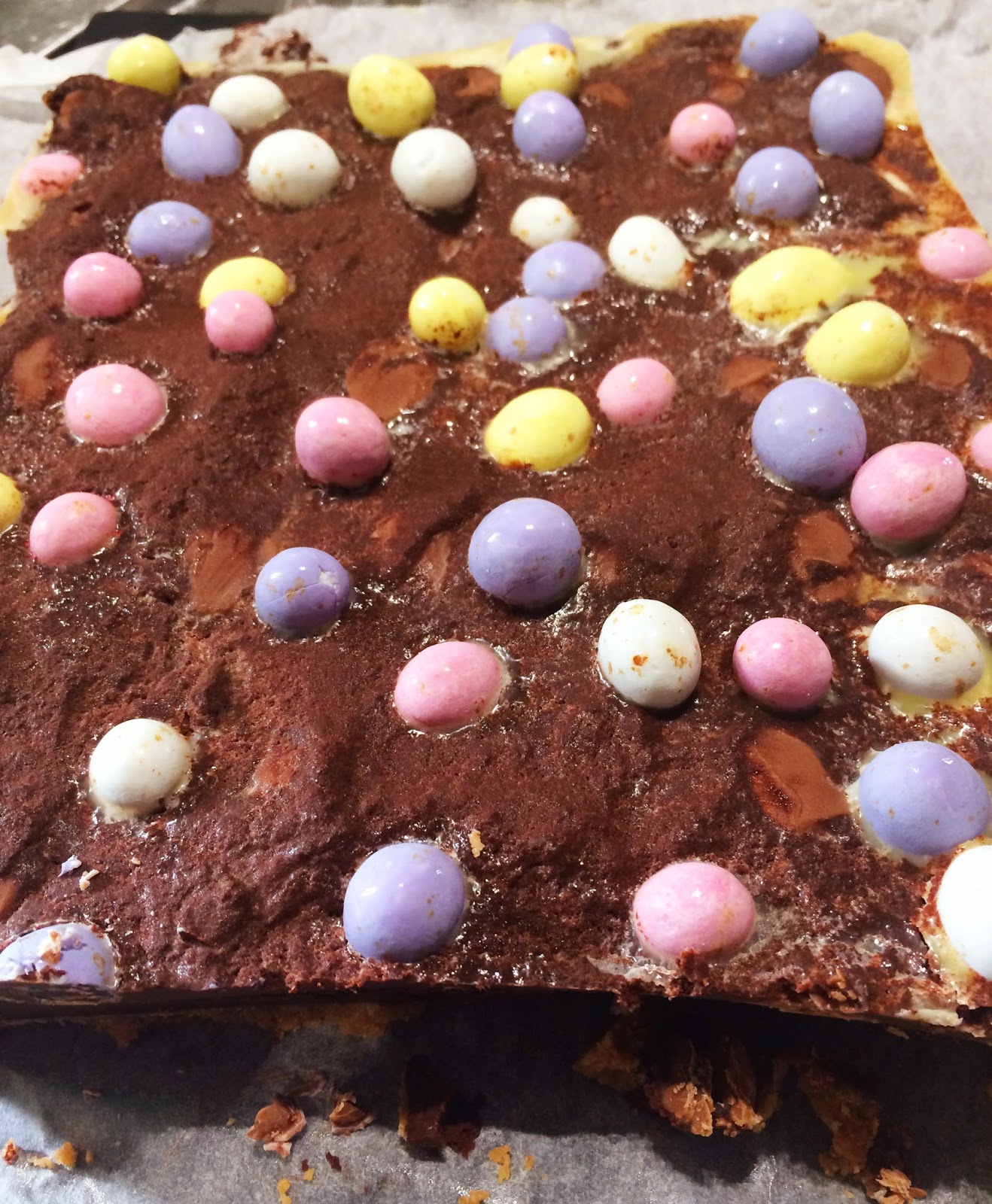 Our dinner provided a great chance to bring out some old favourites and try something new - Avocado, Bean, Corn and Tomato Salad.

Watching Australian Better Homes and Gardens one night over the weekend, there was an Easter theme and a ridiculously decadent easter egg slice. I had to give it a go. I made a gluten free version to cater for a family member by replacing the shortbread with a pre made gluten free chic chip cookie.

The finished product is very very sweet and very very rich. Small slices are called for, even for someone like me who can usually manage a lot of chocolate.

I used Whittakers 72% ghana dark chocolate (there is always a supply in our house), which I think probably made it a little more manageable to eat.

1. Line an 18 x 26cm slice tin with baking paper. Put biscuits in a food processor and pulse until coarse. Add 90g of the butter and combine. Using your hands, press mixture into base of prepared tin. Freeze for 5 minutes to firm.
2. Combine chocolate, cream, golden syrup and remaining butter in a small saucepan over a low heat and cook, whisking often, until melted. Reserve 1 Tbsp of the pistachios, then stir remainder into chocolate mixture. Set aside to cool for 10 minutes. 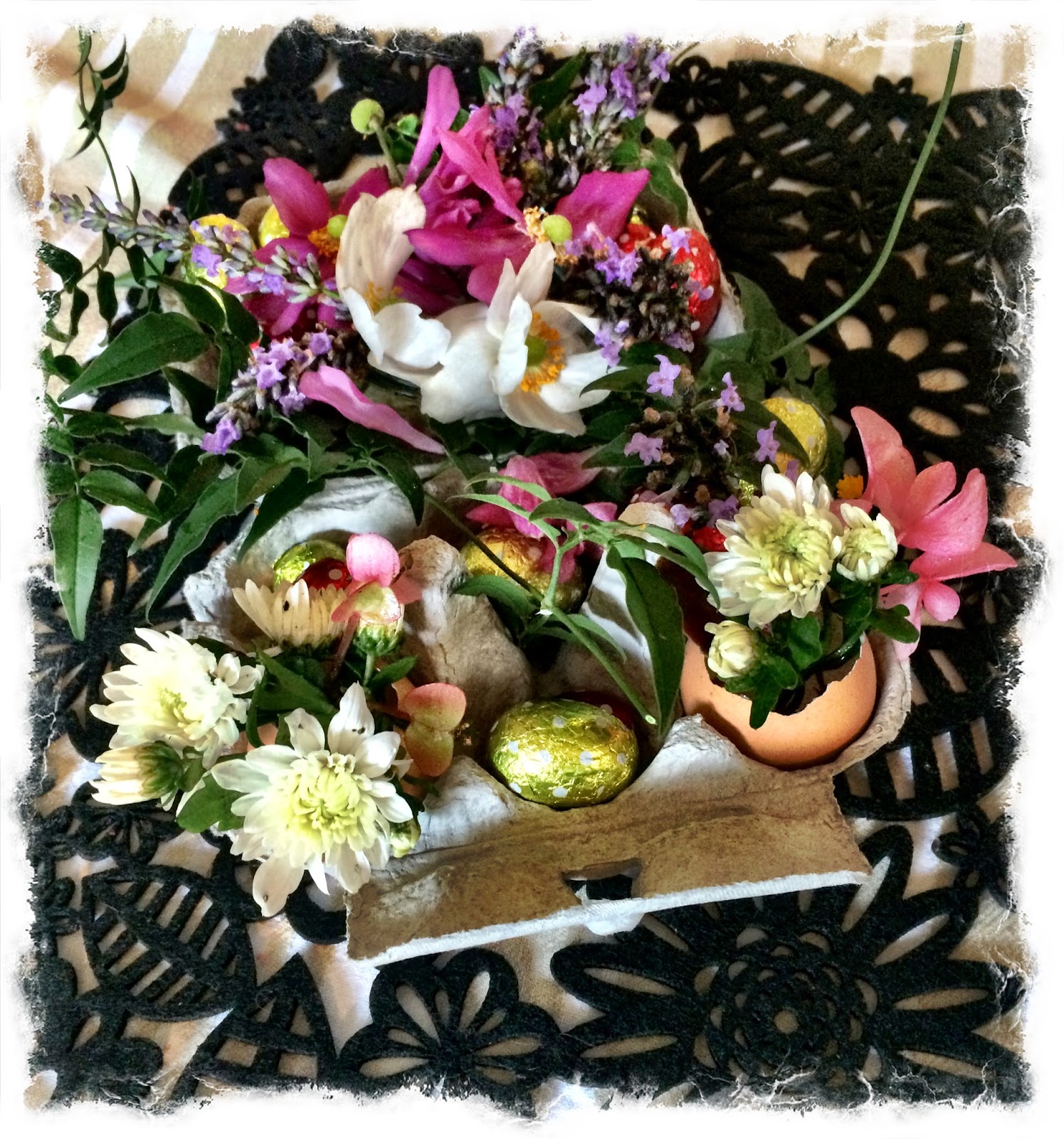 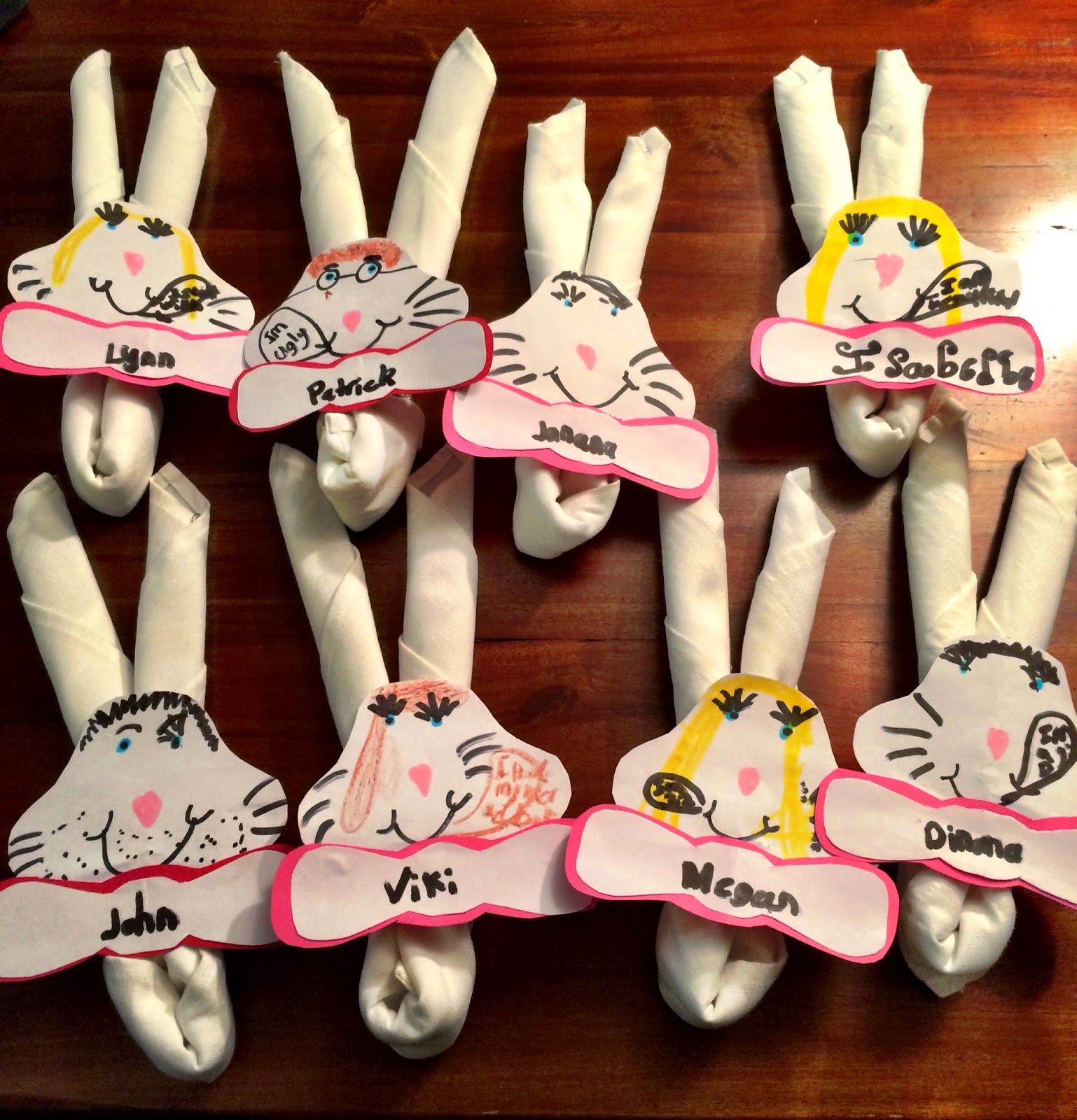 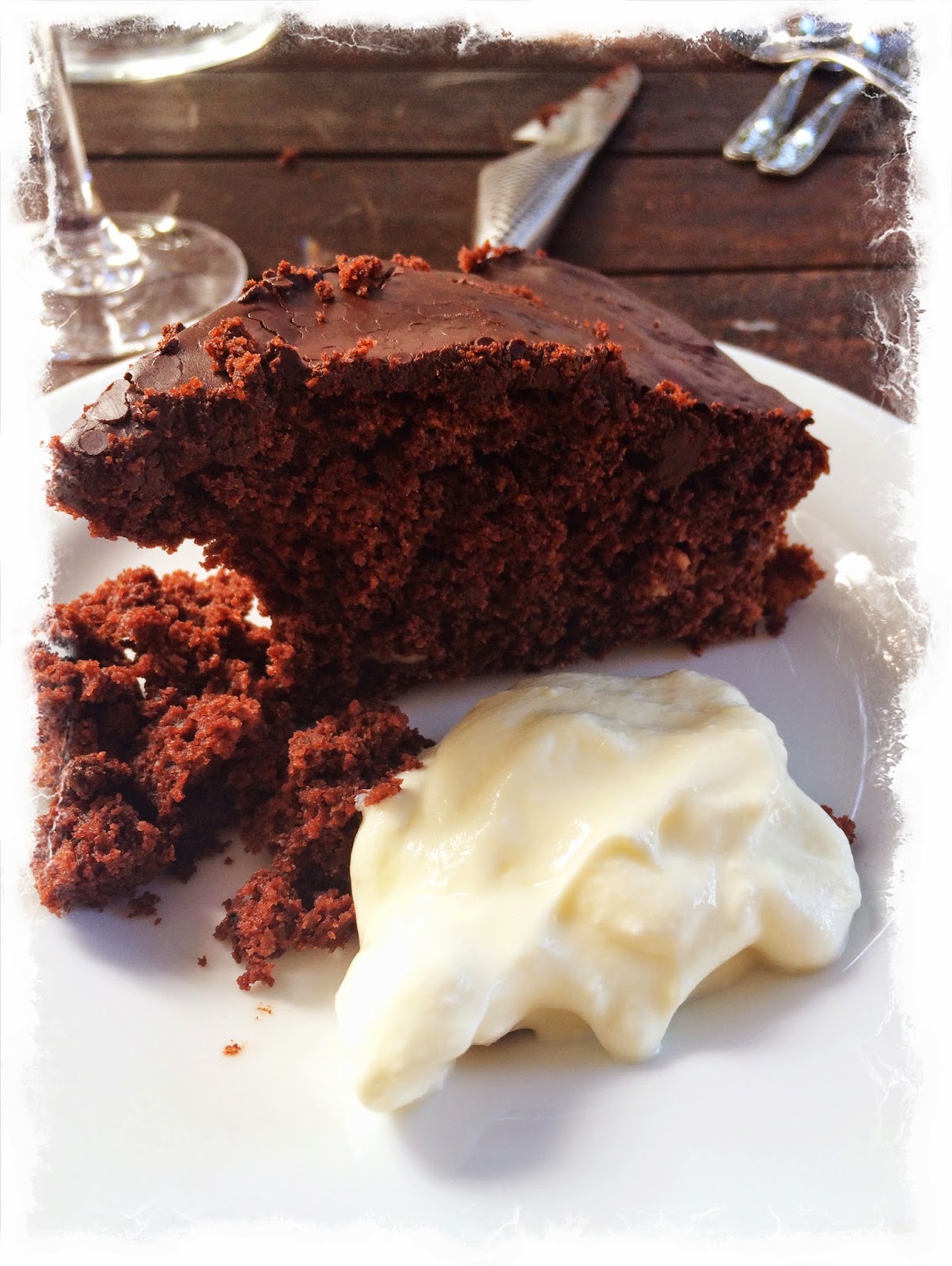 Once again during 'Feijoa Season', I'm on the look out for recipes to use the bounty from our tree.
Isabella showed her 'entrepreneur' tendencies and set up feijoa stands over a few weeks and managed to get rid of a lot of them while making herself quite a lot of money. It seems like there are a lot of people who really love feijoas and she certainly had vey well developed sales techniques.

This recipe came highly recommended and it is nice...you just need to be expecting more of a spice cake than a really chocolate hit. The icing is really chocolately though.

The cake is really light and crumbly. 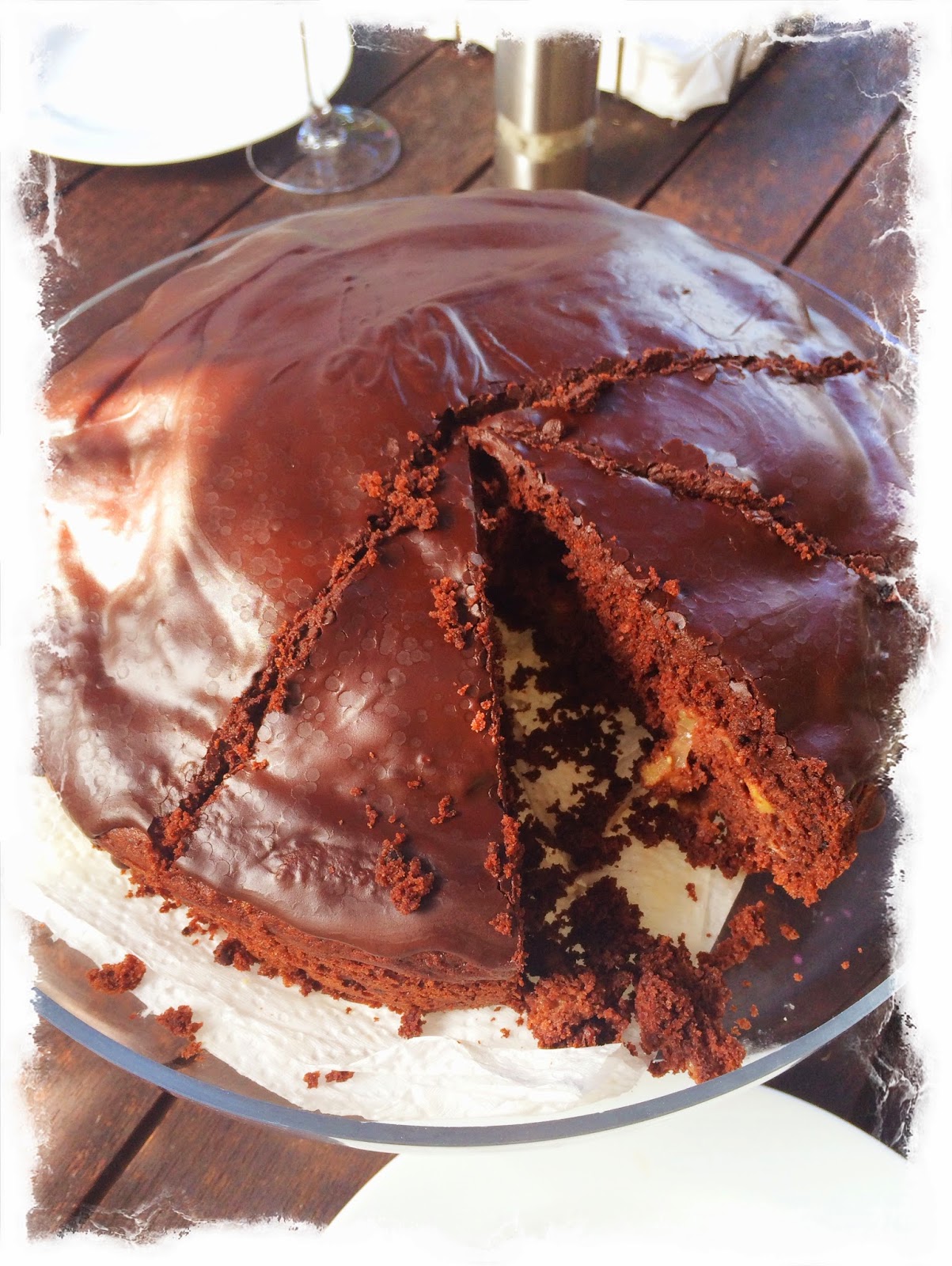 
185g butter, softened3/4 cup caster sugar2 free-range eggs1 1/2 cups peeled, sliced feijoas2 tbsp brown sugar1/2 tsp cinnamon (first measure)1 1/2 cups self-raising flour1/2 tsp baking soda1/2 cup cocoa powder1/2 tsp cinnamon (second measure)1/2 tsp ground nutmeg1/2 cup sour cream
- Lightly oil or spray a 20cm ring tin. Line the bottom of the tin with strips of baking paper. Heat the oven to 180C.
- Peel ripe feijoas (depending on size  I used 8 egg-sized feijoas) with a sharp knife. Slice each feijoa in half lengthwise, then slice thinly.
- Measure 1 1/2cups of the sliced fruit and place in a bowl with 2 tbsp brown sugar and the first  1/2 tsp cinnamon.
- Cream the softened butter and caster sugar in a small bowl with an electric beater.
- Beat in the eggs one after the other, then transfer the mixture to a large bowl.
- Stir in the prepared feijoas, sifted flour, baking soda, cocoa, second measure of cinnamon and the nutmeg alternately with the sour cream in two batches.
- Transfer the batter into the prepared pan and smooth the top evenly.
- Bake at 180C for 45-50 minutes, or until a skewer exits cleanly from the middle of the cake.
- Allow to sit for 5 minutes, then turn out onto a wire rack and remove the baking paper. Allow to cool completely.
- Cover the top and sides with the chocolate glaze.
For the chocolate glaze
130g dark chocolate40g butter Place in a small microwave proof bowl and heat on 50 per cent power for about 1 minute. Whip with a knife until smooth and shiny.
Posted by Unknown at 11:15 AM 0 comments 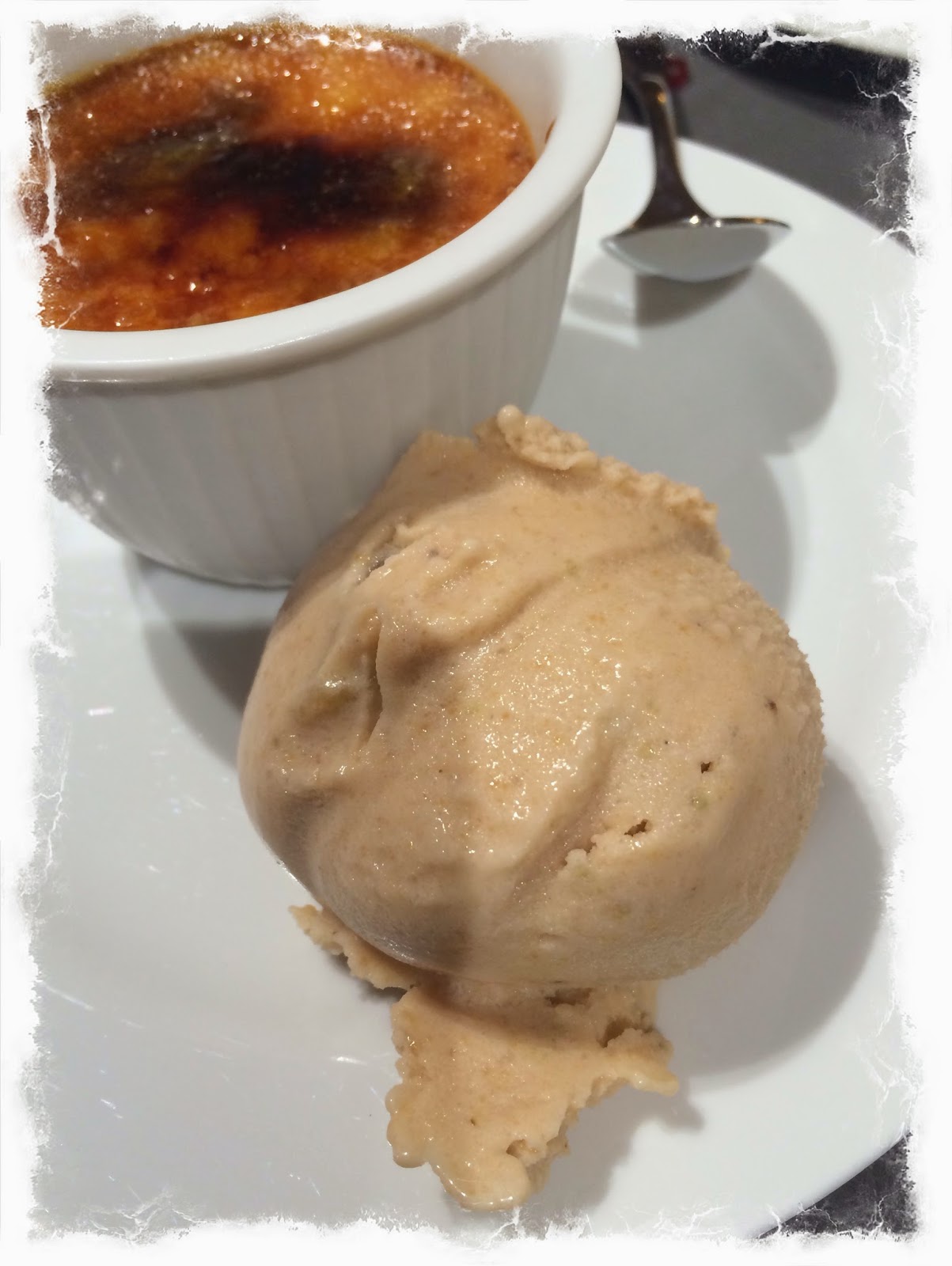 Yes, another new feijoa recipe. This is a pretty easy and reasonably healthy ice cream recipe. You just need to be prepared well in advance. No ice cream maker needed!
This one is from Nadia Lim
I chopped and froze the fruit days in advance which made preparation on the day I needed it easy.
The ice cream was great. Not too sweet and not too rich - almost a cross between ice cream and sorbet.
I will make this again. It would be pretty easy to have the fruit stored in the freezer and make it out of season.

I served it with White Chocolate Creme Brûlée. A bit excessive? Maybe. But it was good!

Line a large tray (that will fit in your freezer) with baking paper and arrange feijoas and banana on top in a single layer. Cover with cling film and freeze for at least 8 hours or overnight until frozen hard.
When ready to serve the ice-cream, place frozen feijoas and bananas in the bowl of a large food processor with a strong blade. Mix cream, yoghurt and vanilla together.
Add half of the cream mixture to the frozen fruit and turn on the motor to blitz everything together until smooth and well combined - add more cream mixture as necessary, until you have achieved an ice-cream consistency.
Add the crystallised ginger (if using) and very briefly pulse tojustmix it in with the ice-cream.
Scoop instant ice-cream into bowls and serve immediately, with sliced feijoas. 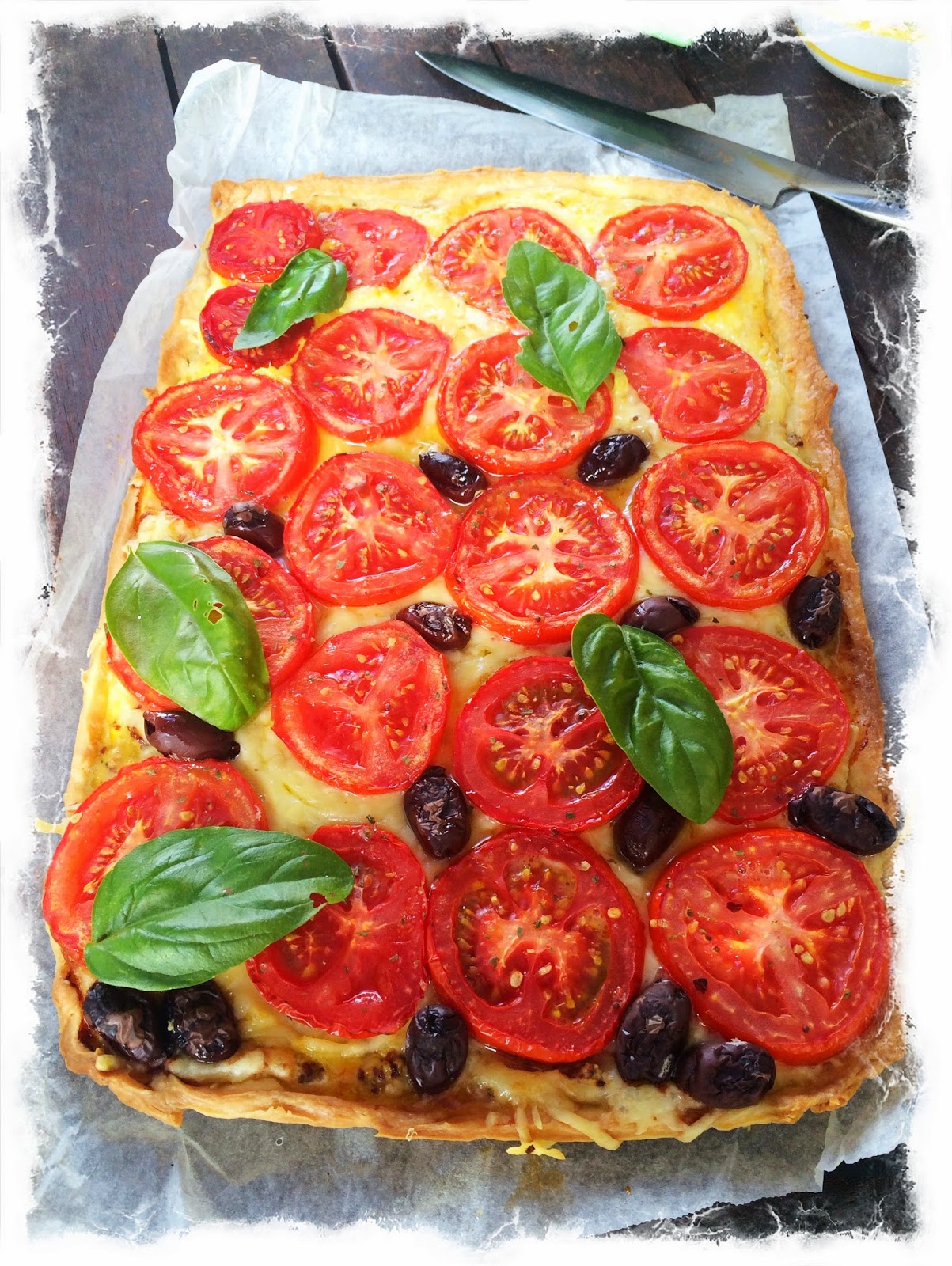 There is a little French cafe near our home and very near a park that Isabella loved when she was smaller called Pyrenees that has the most yummy food. Healthy - no, but very very tasty.
Isabella is obsessed with their macaroons but I am most tempted by their savoury offerings. One of the regular features is savoury tarts, usually simple ingredients that combine to form a flavour sensation.

When I saw a Ray McVinnie recipe recently for a French tart I had to make it.

I still need to work on my blind making. I can never seem to get the pastry well cooked.
I think in this recipe the oven tray you place the baking dish on needs to be heated in the oven first.